Tap dancer extraordinaire Bunny Briggs died at the age of 92 in on November 15, 2014.


"Bunny" Briggs was born Bernard in Harlem on February 26, 1922 on Lenox Avenue. His mother was Alma Briggs who in 1920 was living with her mother Abrialla and her brothers and sister. Briggs got his nickname "Bunny" from his grandmother. Every time she would come home from work he'd quickly scoot out of the room and get her slippers for her.
﻿
Show business was in his family. His Aunt Gladys was a chorus girl who in 1925 was performing at the Lincoln Theatre. Brigg's mother took him to see her perform around this time. Upon seeing tap dancer Bill "Bojangles" Robinson, dance at the same theater he told his mother he wanted to be a dancer. "He started dancing and I just sat there in awe. At that time, I knew, what I was going to do." After this incident it was basically cast in stone that he was going to be a dancer.

﻿﻿After learning tap dancing from the streets of Harlem, by 1927 he was dancing with a children's group called Porkchops, Navy, Rice, and Beans. They would perform to tunes like Bugle Call Blues at ballrooms across New York City.

Bunny Briggs tells the story best himself. "I started performing tap in the street. The record store used to put the "Amos n' Andy" show on the loudspeaker so people in the street could stop and listen to it. The owners would say, 'Bunny, as soon as 'Amos n' Andy' goes off, we'll put a record on and you start dancing.' And that's what I did. People would throw money at me and I'd take it home to my mother, which I was very happy to do. I was around 5 or 6."

He was quickly "discovered" by jazz pianist Luckey Roberts. Again Briggs tells how it was, "Next thing I knew, Luckey Roberts was in my house talking to my mother, and I was working with his orchestra, Luckey Roberts and his Society Entertainers. We went into houses of the blue bloods: the Astors, the Wanamakers, the Fords, the DuPonts. It was excellent. All I could smell was gardenias and champagne. They bought me toys, they sent my mother all kinds of gifts-the apartment filled up." 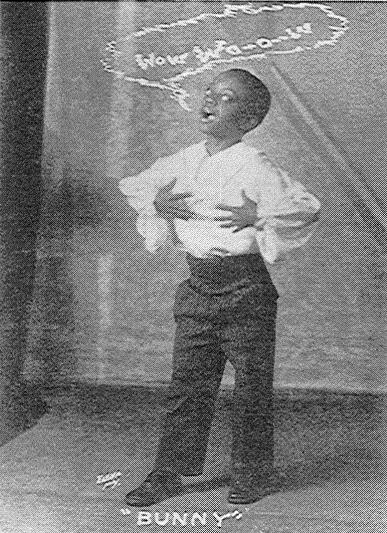 In August 1931 he was accompanying Roberts and his sextet on a weekend cruise of the, "French line steamship Paris, to Bermuda."
He was only seven years old when he appeared with Luckey Roberts at the Cocoanut Grove in Palm Beach, Florida where the local newspaper reported, "In addition to the regular cakewalk which never fails of high entertainment... there will be special features. "Lucky" Roberts... song composer from New York and Bunny Briggs a seven-year-old whose song-and-dance numbers created such unusual interest last Wednesday night will be included."

When he was around ten years old he took part in his first stage show at the Harlem Opera House with Cab Calloway, but things didn't go so well, "I had stage fright. The music played but I just froze. I didn't care." However, Briggs appeared, billed just as "Bunny," in the 1932 Steppin Fetchit film Slow Poke.


Being a professional dancer as a child and dancing at one engagement after another could cause problems. New York's Gerry Society whose official name was the New York Society for the Prevention of Cruelty to Children forced Briggs to stop all his engagements and attend school.

His mother Alma must have been happy that he was no longer performing because she was never thrilled with her son being an entertainer. Charlie Barnet wrote that his, "mother didn't like show business and once told me that she would rather see her son running an elevator than doing what he was." Barnet also suggested that Briggs' mother had influence over him and stated that, "he had a strong mother-complex which I think eventually kept him from being a big star."

It was about 1940 when Bunny Briggs seems to have begun dancing again professionally. From this time on he would be dancing with some of the biggest Big Bands in the business; Count Basie, Earl Hines, Tommy Dorsey, Charlie Barnet and Duke Ellington.


Since he would improvise when he danced and wasn't working from a set routine, he could move from one band to another and easily adapt to their varying styles.

"I was always an improvisation dancer. I never danced to the same tune more than two or three times. My style is carefree. It’s carefree and hard, but I try to make it look easy.” He created a paddle-and-roll style of tapping, but he never bothered naming or labeling any of his specific steps and moves.

Briggs was performing in a Baltimore at a club in 1940 where he would dance on a table for part of his routine, when Charlie Barnet who was performing at the Royal Theatre, stopped by and saw him dance for the first time.

In his autobiography, Those Swinging Years, Barnet said he thought Briggs was, "one of the most talented performers I have ever seen. He was quite young... he really had it all. He was a sensational dancer, had a distinctive singing style and a great personality... He made several records with us and one in particular, East Side, West Side, was a big hit. It didn't matter whether we were at the Apollo or the Paramount, before a black or a white audience, Bunny broke up every show and was always a smash hit." 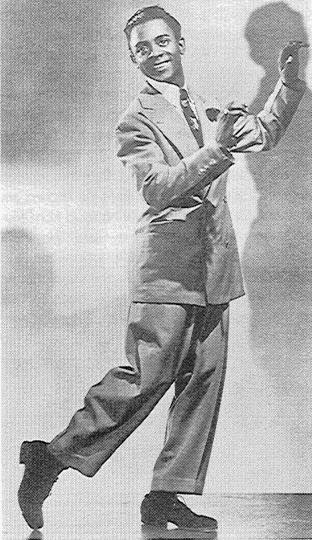 In early 1942 he worked a long stint at Small's Paradise a night club in Harlem. He would then sign up with Crane Management, run by Louise Crane, in June.

On August 13, 1942 Briggs began an eleven week run at New York's Kelly's Stable. On November 2nd he started at Club 666 in Detroit which was his second night club appearance outside of New York at that time.

During the 40s Briggs was being billed as the Prince Charming of Taps touring with several bands.

From November 10, 1945 until the closing show on June 29, 1946 he played Cicero in the Broadway musical comedy Are You With It?
Briggs was appearing with the Charlie Barnet and His Famous Orchestra in 1947 and in late 1948 he was touring with Boyd Raeburn and His Orchestra.
﻿﻿﻿﻿﻿
By the end of the 1940s Briggs began his numerous television appearances. On the December 12, 1948 he was on the Ed Sullivan Show making an appearance.
In the first half of 1949 Fox shot a Movietone short of the Charlie Barnet Orchestra with Bunny Briggs playing the Western Union delivery man. He did another stint on the Ed Sullivan show on October 30, 1949.


Briggs was featured dancing in the May 1950 Universal short film King Cole Trio & Benny Carter Orchestra. He was also featured on the television show Cavalcade of Bands at least once in the 50s.

On May 27, 1951 he made another appearance on the Ed Sullivan Show and a few years later on March 12, 1955 he was the guest dancer on the Jackie Gleason Show.

In early September 1956 Briggs appeared for a week with the Lloyd Price big band in Washington, D. C. With the help of Dizzy Gillespie and Charlie Parker Briggs developed a style of tap dancing that worked well with bebop. At the 1960 Monterey Jazz Festival, Briggs danced with the Duke Ellington Orchestra. Soon he was being eluded to as, "Duke's dancer," because he worked with him so often.
By 1962 when he appeared with several other tap dancers at the Newport Jazz Festival the newspapers were billing tap as a "dying art." Around the same time he was a guest on the Tonight Show that August.

Duke Ellington asked Briggs to be the solo dancer for his David Danced Before the Lord number that had been featured in the 1961 film Paris Blues. It was to be part of Ellington's Concert of Sacred Music and would be performed in a church.

Briggs who had earlier in his life contemplated being a Catholic priest was a very religious man and hesitated to accept Ellington's offer in the fear that tap dancing in a church could prove sacrilegious. "When I first heard the song, I thought it was pretty, but I didn't want to dance to it in the church. Because in the church you can't go for laughs, you can't go for applause." But after praying for guidance he decided to do it. "I prayed to God. I asked God to give me the routine." Later, he wasn't even aware of what he actually danced. "A haze came over me, and I wasn't drunk. I was together."
The performance premiered at Grace Cathedral in San Francisco on September 16, 1965. This concert was filmed and has been highly praised.


Briggs continued dancing to the piece over the next several years with Ellington's Orchestra. He performed it on the Ed Sullivan Show in 1966 and later that year at the Fifth Avenue Presbyterian Church for the New York premiere the day after Christmas. Again he performed it on December 2, 1967 at Constitution Hall in Washington, D. C. and once more at the  Cathedral of St. John the Divine in New York City on January 19, 1968. Later other tap dancers would perform to this number including Baby Laurence, Buster Brown and Rich Rahn.

In the 1970s he continued touring and made more appearances on the Tonight Show, Apollo Uptown and Monk's Time as well as performing on cruise ships. Saxophonist Houston Person invited Briggs to dance on his recording of the Jerry Jeff Walker tune Mr. Bojangles for his album Broken Windows, Empty Hallways in 1972.
Starting with the 1979 documentary No Maps on My Taps, Bunny Briggs' television appearances picked up and he had a career Renaissance. Tap dancing made a reasurgence in the 80s. Bunny Briggs and many of his fellow tap dancers were touring and making appearances more and more.
On television in 1980 he was seen in Uptown: A Tribute to the Apollo Theatre. He performed in Sweet Saturday Night in Europe and then worked on the Broadway production, My One and Only in 1983.

Briggs toured Europe with The Hoofers which included Briggs and the tap dancers Lon Chaney, Chuck Green, Jimmy Slyde, and Sandman Sims. He then appeared in Motown Returns to the Apollo, a two hour NBC Special in May of 1985. He was included in the 1986 video compilation, Doctor Duck's Super Secret All-Purpose Sauce. He also acted in the television movie Mike's Talent Show which aired in 1987.

1989 was a big year for Briggs starting on January 26th 1989 he played a hoofer in the popular Broadway musical Black and Blue for which he was nominated for a Tony Award in 1989. He appeared in the Gregory Hines movie Tap where he does a great job singing the Dorothy Fields-Jimmy McHugh song On the Sunny Side of the Street. He further appeared in Tap Dancers in America the same year which aired on PBS' Great Performances.


On January 20, 1991, Black and Blue played its final performance. A few months later, on May 3rd the film A Rage in Harlem was released in which his wife, the former harpist, Olivette Miller Briggs acted in.

Oklahoma City University honored Briggs with an an honorary doctorate of Performing Arts in 2002.

Bunny Briggs died in Las Vegas, Nevada, where he had lived for many years on Saturday, November 15, 2014. 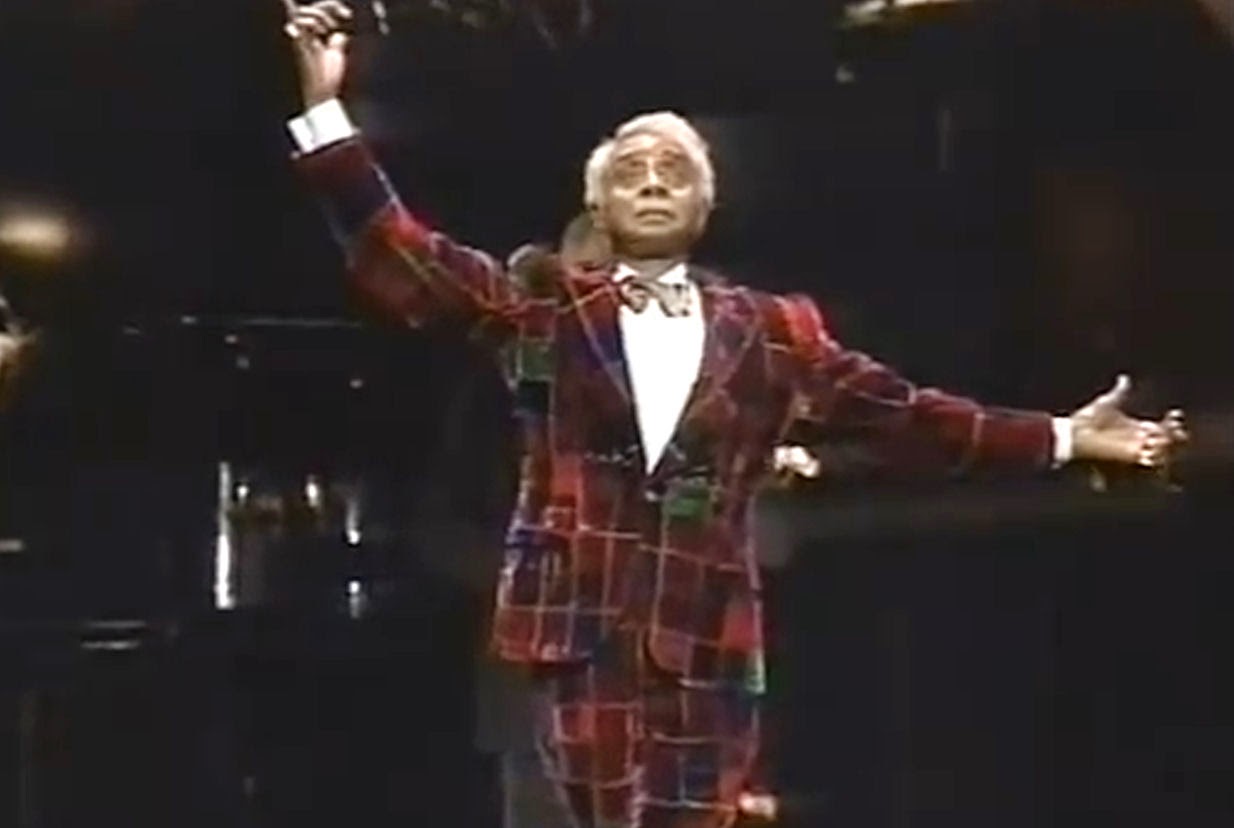 Here is a great page that I encourage people to check out!
Bunny Briggs Tap Master and Vocalist
and
The New York Times Bunny Briggs Obituary
and
Services set for legendary tap dancer Bunny Briggs
Posted by Eric Bruno Borgman at 7:18 PM